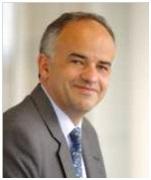 He has a long and esteemed career at BNP Paribas, having joined Paribas in 1983, in the Commercial Banking department in Paris, moving on to the Treasury Department in 1986.  Since 1988 he has held positions as Global head of Interest Rate Options, then Global Head of Equity Derivatives, and from 1995 to 1999 he led Paribas Capital Markets Japan as General Manager before being appointed Global Head of Fixed Income, based in London.  More recently, he was Head of Corporate and Investment Banking and Head of Investment Solutions, again based in London.