Protecting your positions at EquityClear Ltd

Managing and mitigating risk is at the heart of everything we do in EquityClear. Our risk management framework is built upon three pillars:

All trades cleared at EquityClear are required to be fully collateralised in order to reflect mark-to-market changes in their value.

Initial margin and variation margin requirements may be met with cash in certain currencies or highly-rated government securities, subject to a haircut.

EquityClear also conducts several intraday margin calls during the course of the trading day. This ensures that LCH is holding sufficient collateral throughout the day, rather than being exposed to the gap risk of having to wait to make one large margin call the following day.

Clearing Members may also post certain types of mortgage-backed securities guaranteed by the US government, US and European government agency debt and certain securities issued under government guaranteed credit schemes.

The protection of our Clearing Members and their clients informs absolutely all our thinking as to risk and collateral management at EquityClear.

EquityClear offers three different types of client account which are each compliant with the European Market Infrastructure Regulation (EMIR).

EquityClear’s default management procedures are in place to resolve the default of a Clearing Member in the fastest manner possible with the minimum level of disruption to non-defaulting Clearing Members and the market as a whole.

We follow a clearly prescribed framework to ensure that all stakeholders are aware of our contingency procedures and are familiar with our process in the event that default procedures have to be activated.

Risk Neutralisation: LCH will hedge the defaulter’s positions (both house positions and those positions recorded to a client account which are not ported to a backup Clearing Member) with the assistance of our Default Management Group, which is comprised of LCH staff and a revolving group of senior equities traders from the major equities market makers.

Portfolio Auction: Once the risk of the portfolio is substantially reduced by such hedging, EquityClear separates the defaulter’s portfolio by product and currency. An auction is then conducted for each portfolio.

Loss Attribution: In the event that losses are greater than the financial resources of the defaulting Clearing Member and LCH’s ‘skin in the game’, the funded default fund contributions of solvent EquityClear members are used.

EquityClear’s default waterfall establishes the order in which the financial resources of a defaulted Clearing Member, LCH itself and the solvent Clearing Members are applied during a default resolution.

If these assets prove insufficient to settle the default, LCH’s ‘skin in the game’ is applied next. It is only after all of these resources are exhausted that default fund contributions from non-defaulting Clearing Members are used to close out the portfolio.

In the extremely unlikely event that such resources are consumed, additional safety procedures as provided under the LCH rulebook will be triggered, with the ultimate aim of allowing the service to continue. 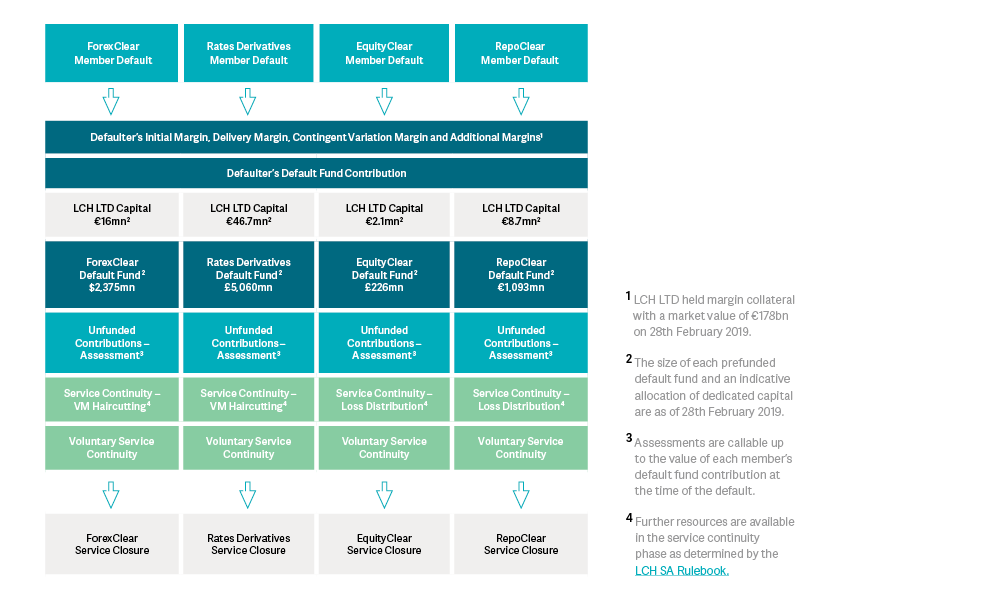