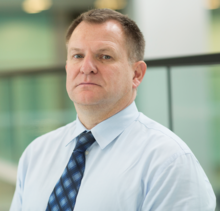 Matt joined Citigroup in 1988, and began his trading career in European Swaps & Option shortly thereafter.  Initially focused on trading the four legacy European currencies, Matt’s mandate soon expanded to include other currencies. In 2000, a year after overseeing the conversion of 11 legacy currencies into the new Euro, Matt became Head of EMEA Linear G10 Rates trading.

Matt represents Citi on a number of industry forums, including the European Primary Dealers Association and Association for Financial Markets in Europe (AFMA)

In March 2016, as part of the Senior Manager Regime, Matt was appointed as the SM for Rates, Markets Treasury and Finance.
Matt joined the board of LCH Swapclear Ltd as a non-executive Director in September 2016